After our wanderings around the financial district and Jack the Ripper’s old haunts, we disembark 500 feet away at Aldgate East, venture eastward, and find an all the more personal, but equally barren, pub-scape.

So much has been decided with the toss of a coin. If England bats first, how Tim and Daisy spend their evening, whether or not Anton Chigurh caves your face in with a captive bolt pistol. For Greg and I the coin would decide Commercial Road or Whitechapel Road. We had enjoyed our first drinks at The White Hart, a small bar adjacent to Aldgate East station which holds all the trimmings of your standard British pub and now we stood on the corner outside London Met putting our future in the hands of a grubby two pence piece.

Heads was Commercial, tails was Whitechapel. I flipped the coin, failing to catch and stumbling awkwardly, my hands flapping in front of me as I pursued it across the pavement. It came to rest at the side of the road and, looking down into the dirt, we saw the profile of our fair monarch seal our fate. Commercial Road it was.

The first three pubs left little to be desired. To start, The Castle – a rather gloomy affair of matt black paint, sticky flooring and an inexplicable floor to ceiling cage at the top of the stairs. Next, after a worryingly long trudge down Commercial Road, The Hungerford Arms – a small, pokey bar filled with a variety of East London characters and a well-worn pool table. “It’s our local!” exclaimed an ageing, peroxided pearly girl when asked if she drank there often. We asked if there were any more decent pubs nearby: “Whitechapel Road, that’s where you want to be”. But we could not deny the steely instructions of our copper Queen.

Then, The George Tavern, which despite the three pound entry fee and advertised Ian Brown Tribute Night was exactly the same as previous occasions Greg and I have visited. The only addition being Shane Meadows’ bleak drama This Is England projected onto the wall. We asked the barman if there was going to be live music later on: “nah, don’t think so, mate”. Fuelled by the lust to prove that this lengthy stretch of inner-city tarmac had some life, we pushed on. Greg told me about Stephen King’s The Long Walk, I spoke about the Dylan Thomas poem Do Not Go Gentle Into That Good Night – such was our mood.

After another long slog we ventured into what appeared from the outside to be a bustling, live music venue, but it would prove to be a cruel veneer. Inside The Royal Duchess was a stereotypical, almost comical, rotund, ageing pub singer in an ill-fitting tux crooning along to a backing track of pop hits. The clientele, to which we were junior by a good two or three decades, stood around the edge of the laminate wood dance area. The wives swung their hips and sipped vodka mixers, the men, all of whom had slicked back grey hair, road map faces of scars and creases and fading tattoos across their knuckles, lent on the bar discussing doing ‘one last job’. Despite the stern looks being shot our way we tried to rile up a party. We took centre stage among the criminal elite, grooving and singing as best we could. Some of the face-hanging women joined in, a couple of hips were bumped and there was a mutual uneasiness disguised by giggles and high jinks.

Further on, just past The Troxy on Commercial Road, we came to The Railway Tavern, a silent commuter pub filled entirely with male couples and staffed by a Julian Clary parody. The situation was dire. We needed more beer, we needed more people, more fun. Again we set off into the night and onward further into the depths of East London. We weren’t sure if we were even on Commercial Road any more. Had we quietly died of exhaustion and slipped into purgatory, and was this vast, lifeless drought to be our eternal struggle?

Finally, we came across The Westferry Arms and, thank the lord, it was full of people, excitement and, most importantly, beer. We pledged to get as many drinks down us as possible, which seemed to please the wiry, shorthaired landlady who was enamoured and desperate for our company from the moment we walked in. She chatted us up, swayed with us on the dance floor and, in an oddly surreal blending of cultures, jived for Greg whilst he slammed out beats on a discarded djembe that lay on a bench next to the DJ. Again, there were mafioso types propping up the bar, shooting angry glares our direction but we didn’t care. The 2.2 miles we had journeyed felt a lot longer and getting down with this pickled baroness of the East was our well-deserved trophy.

“We’d love to, but we have to get the last tube otherwise we’re stranded”.

She shrugged and looked us up and down suggestively: “Might not be a bad thing”. 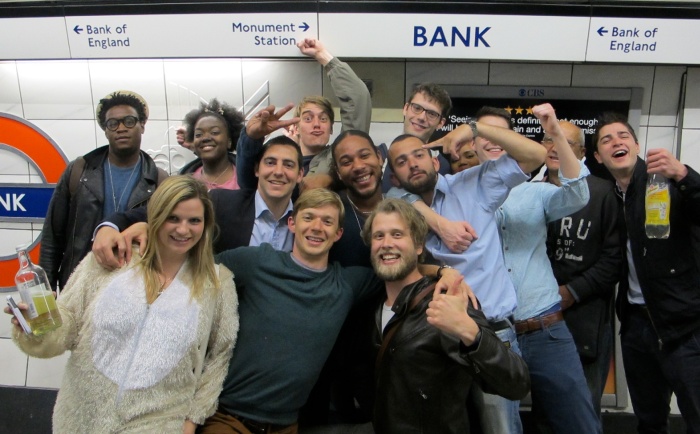