This is where it all begins. The forgotten town of Acton was home to the first ever Waitrose, is the birth place of The Who and, with 23 years stretching out in front of us, our first stop.

A is for many things. A is for Apple. A is for Alpha. A is for Acton – the anterior stop on our boozy adventure that will take us to every corner of the capital and beyond. With trepidation and dizzy, naïve excitement we trudged up the District line to Acton Town. Our Alpha. Our Apple.

First drinking hole – Paul et Virginie – a restaurant and bar named after the plaudit-burdened Jacques-Henri Bernardin de Saint-Pierre novel and situated a stone’s throw southward from Acton Town station. Despite the exotic, highbrow name, our first pint at our first stop on the first evening of our big adventure was not brimming with the beauty and majesty of Mauritius. In this instance A was for Afflictive. The restaurant aspect of the venue seemed mostly abandoned and the bar, adorned with bizarre trinkets from adolescent wiles (a small shark jaw, a Bart Simpson neon bar light, a dust-covered inflatable palm tree and one solitary, crumbled drinker desperately clinging onto the far end), was staffed by a haggard man with eyes that were so pained by the sight of strangers that they squinted into tight, accusing piss-holes every time they were faced with one. Paul et Virginie did, however, appear to have a large selection of popular lagers which would surely take the edge off the silence.

A single nod from the sturdy face.

Our dreams of larger than life characters and anecdotes galore were fading fast. We drank, quickly and in silence, bailing before our empty glasses had even met the sticky top of the bar, and walked northwards praying for warmer climes. Much to our dismay, and to the dismay of the community one imagines, we passed a number of boarded up boozers during our search for another foaming glass. Acton appears to be a suburb that is struggling. Some establishments seemed to have been closed for many months, maybe longer. Some looked as if they had called last last-orders barely hours earlier. 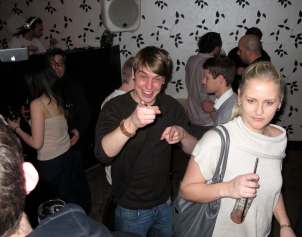 We finally stumbled upon The Red Lion and Pineapple, an amusingly named Wetherspoon’s that provides all the trimmings you’d expect from the chain – cheap beer, cheap food, cheap thrills. But across the way we could see our next stop, The Chatsworth. From our viewpoint it appeared to have class, panache even. Is this why other Acton pubs had fallen by the wayside, because The Chatsworth had monopolised with its high-class jinks? We finished our microwave meals with gusto, flattened our hair and headed across.

It turns out The Chatsworth is not famed for its high-class jinks. No matter what the patrons tell you. 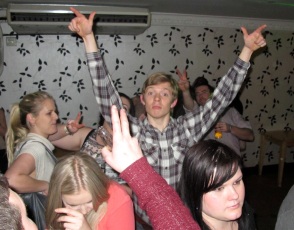 “The girls will look after you”, a regular told us, referring to the busty bar staff. “It’s great here. You boys will get lucky tonight, no problem”. He then left and, with no company in tow, took a third of the clientele with him. Greg and I shared a look – Acton was an inauspicious start. But, to the regular’s credit, we did get lucky – sort of.

The Chatsworth soon filled up and a young girl, wearing leggings and a low cut top, proceeded to grind every male in the venue. No cock was safe from an uninvited dry hump. Some men hoarded round her desperate for a go, clutching her face to try and steal a kiss which may or may not confirm a halved taxi fare. The others (myself and Greg included) shied away, unwilling voyeurs to a fully clothed courtship of the most perverse order. Our obvious reluctance did not stop her swaggering over, sticking her gyrating arse on our crotches and thrusting her fake-tanned fingers down our pants. It would appear that in Acton, A is for Anything Goes.

We soon found ourselves on the dance floor, grooving to Franz Ferdinand and other standard bar/club options. Chatting to an Australian who had recently moved over to find work, I asked him the difference between Acton and Sydney, “It’s pretty much the same” he drawled, “full of Australians and Asian cunts”. Skirting over his blue remarks I asked what he thought of London. “Y’know, I’m not scared of your city gangsters because I once killed a wild pig with a knife”. He suddenly pointed to his sister, a chunky girl who was so proud of her heritage she wore leggings adorned with maps of Australia: “she’s my sister, so if you want to have a go you can”. As desperate as we were to fulfil the promises of The Chatsworth regular, the last tube was calling.